Hello there, hope you are well and safe and enjoying the autumn so far.

I will at some point do the regular Tim Edey Sleeping tunes show live again, but for now if you live near; Liverpool, Hereford, Pembrokeshire, Dorset or Newcastle, please come and see me in person!
My best wishes Tim 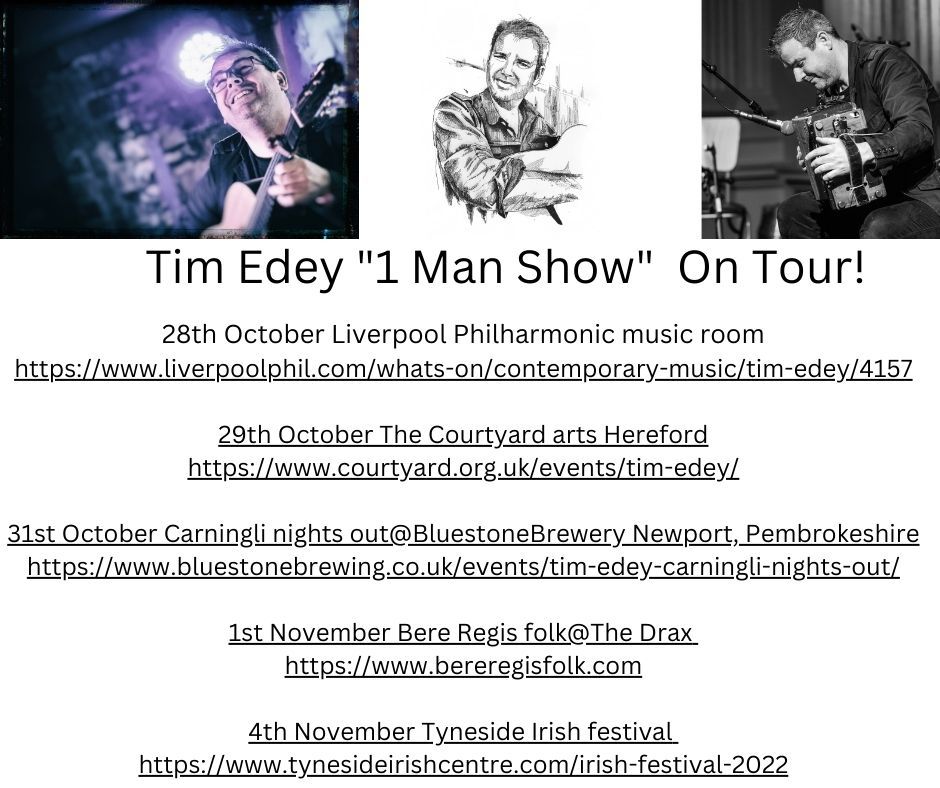 Tim is absolutely delighted and excited to release a 100% live & un-edited album of a special streamed show from April 9th 2022 which was recorded as Tim played by the legendary Robin Wynn Evans@Tpot studios, Perthshire, Scotland.

18 tracks an incredible variety with classic "Sleeping tunes & more shows" played as only Tim can! 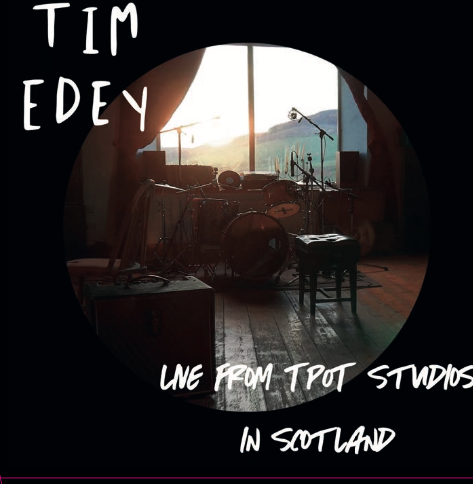 Listen to the show here;

Tim's hugely popular Saturday night Facebook live Sleeping tunes & late date show is taking a short break while Tim is back on the summer festival circuit, back on air very soon folks on the usual link below;

"I got rhythm" the stunning new album (see below) was released a few days ago and has already been featured on BBC SCOTLAND'S flagship Folk and roots show "Travelling folk" with Bruce MacGregor last night, listen back to the interview and 3 tracks below!

This music was all recorded in one take during lockdown 2020 and is a selection of my favourite music 🎵 on guitar and some melodeon with some really special guests; Natalie MacMaster - fiddle, Donnell Leahy - fiddle, Michael McGoldrick - low whistle, flute, snare, Patsy Reid - strings, Tom Burnett - brass & Ross Ainslie - whistle & it was produced by young upcoming Scottish producer David Macfarlane whom also plays on the record.

It’s not a “folk” album in sense that it’s got 1 or 2 folk style tunes but it encompasses everything I love to play .. a trip to Paris for the classic musette "La Bourrasque" a duet with Canadian fiddle legend Donnell Leahy, Bee Gees "How deep is your love" with Scottish string lady of the moment Patsy Reid, Sting's classic "Fields of gold" a duet with Natalie MacMaster!, a beautiful haunting version of "Lily Marlene" with Irish flute legend Mike McGoldrick & much much more...from Irish to gypsy jazz to classical and all with a strong Celtic/jazz theme.

It’s an album I absolutely love... and it’s me and truly what I am about musically.

It’s been delayed by the dreaded you know what and with non EU membership also that too sadly as all cds are pressed in the EU mostly, and certainly the best value ones!;)

Lots of national BBC airplay for the charity single cover of Sting's "Fields of gold" taken from the album "I Got Rhythm" out at the end of February.

His second BBC Musician of the year Award! winning the radio two one in 2012.

Huge thank you to all that voted!

"My favourite guitarist in the whole wide world" Natalie MacMaster

​“One of the greatest melodeon players in the world". Mike Harding

“Tim Edey plays a host of different instruments to a standard us mere mortals can only dream of. Listen and weep”- Jim Byrne, The Living Tradition

The charity single ended today the 18th January 2021 here on my site and on Bandcamp with all sales from 14th December 2020 to today being given to Sands UK thank you to all whom bought it!

The itunes version will remain up here;

with all sales from this still going to Sands UK the baby loss awareness charity, but the sales from this site & bandcamp will now be my own ones for the new album comin out soon of which the single is taken from.

I have a full MCPS/PRS license to use this track written by Sting (G. Sumner) & published by SONY ATV UK, as a download.

Although obviously at this time Tim can't appear in person at live gigs he is able to play for your folk club, festival, party etc on ZOOM, Facebook etc digital online live event or pre-record a concert to your spec for a very reasonable fee please email here below, Tim is highly entertaining and a natural at this format so you'll not go wrong here really;

With the incredibly difficult times for the music industry & many others and also due to Facebook copyright issues with my own music use & also many other factors, I will be reducing my facebook concerts but instead offering a really exciting new way of seeing me play starting with my  Tim Edey's "Monday music club" starting on 15th August from 8pm-10pm including a chance to chat with me virtually! and listen to a high quality streaming concert in the comfort of your own home for the price of a glass of wine in a pub! More details shortly.

If you enjoy Tim's music consider donating a small tip using the PayPal link below, even the price of a latte makes a massive difference to an independent musician during these times of 100% of work being cancelled! Thank you!:)

LESSONS AND LEARNING WITH THE BEST MUSICIAN BBC RADIO TWO MUSICIAN OF THE YEAR & CHIEFTAINS & NATALIE MACMASTER'S GUITARIST OF CHOICE!

Many new clips of lessons on the store page for guitar & melodeon/button accordion & exciting new acsluive clips including a never released concert film of "Live in Scotland" - The Tim Edey Trio.

"When I play these pieces I feel they tell a story even without words, i feel the emotion of them"
Tim Edey April 2020

"When I play these pieces I feel they tell a story even without words, i feel the emotion of them"
Tim Edey April 2020

Keep your fans up to date on your latest news with our Blog feature. You can even upload podcasts here! If you need some ideas on what to write about, check out this post with 13 topics that musicians can blog about.